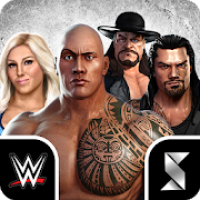 NEW CUSTOM TITLES WITH ABILITIES & BUFFS
* Collect straps and and medals to craft specialized Titles
* Customize and upgrade each Title. Thousands of different combinations
* Equip Superstars before the start of every match to gain a competitive edge

FACTIONS & ALLIANCES, WWE STYLE
* Join a Faction to play with friends and to heal and help teammates
* Strategize with Faction members in your own Headquarters
* Exclusive Faction Missions earn rewards and loot

Terms of Service: http://scopely.com/tos/
Privacy Policy: http://scopely.com/privacy/
User ReviewsAdd Comment & Review
Based on 1 Votes and 0 User Reviews
5 Star
0
4 Star
0
3 Star
0
2 Star
0
1 Star
0
No reviews added yet.
Comments will not be approved to be posted if they are SPAM, abusive, off-topic, use profanity, contain a personal attack, or promote hate of any kind.
Other Apps in This Category
More »